I’m not a sore loser, but I do appreciate the following is certainly going to seem like I am.

But I’ve hated the term Brexit since the day I first heard it. Much like my hatred from ‘Brangelina’ (Brad Pitt and Angelina Jolie). I’m not even particularly a fan of the ‘Spork’ in all honesty.

Not that the name is the only thing I had against the Brexit campaign, but it was yet another reason.

So as you can guess, I voted to remain. I’m a risk adverse person, and I could never see the advantage of trying to make it on our own. It wasn’t a case of not ‘believing in Britain’, but rather wanting to see the proof before going off on a whim and a prayer.

Even though the result certainly has gone my way, I am thankful the campaign is over.

It frankly got stupid, with the flotilla on the Thames being a particularly embarrassing moment.

Many relationships have been put under strain while lies were flying around over our heads. And a lot of bad feeling has been going around. Most notably with an MP actually losing their life.

Britain is a divided nation. And the result has shown that, with just 4% being the difference between the opinions.

But with this result, it’s something I fear they’ll carry on debating on Jeremy Vine’s Radio 2 show every day for the next 5 years. At least with remain, nothing would have changed and that’d be the end of that.

Hopefully, I’ll be proven wrong. Perhaps in 5 years time, I’ll turn around and go, ‘you know what, it was the right decision’.

Because if we decide it was wrong, we cannot go back on the events which happened today. Should we decide to go back to Europe in the future we’ll have no power and we’ll lose the Pound. And yes, you can say we basically have no power in the EU anyway, but imagine what life would be like with none…

However, when you look at the sorts of things Brexiteers believe in, it seems like we’re turning the clock back half a decade. Except, we have no coal or steel industry.

I’ve heard stories of people getting assaulted for the opinions they have. And it seems we’re becoming far more racist and bigoted than I can ever remember.

Here’s a conversation I was, honestly, having the other day:

“That London Mayor, he ain’t British. He’s a Paki, right?”

“Well, he was born in London, with parents who worked in Britain. He even sounds British.”

“You only have to go back a few generations in my family and you can say I’m Canadian.”

“Exactly.” And I walked off.

And I don’t honestly think I’ve had that sort of conversation with someone before.

When I went to work today after the result, I felt exactly the same way as I did during my first year of secondary school. It was like I was back at the mercy of bullies who were stopping me from living the life I wanted. They had taken it away from me and they were gloating in my face. I felt physically sick.

Another argument is that ‘the European Union is basically what Hitler wanted – to rule all of the Europe. And look, it’s Germany in charge of everything. It’s what Churchill would have wanted.’

I’m sorry, but although Churchill may have been one our greatest Prime Ministers who saw us through the war, we can’t base politics today on a 70-year-old ‘ideal’.

And I’m also sorry, but ‘our boys’ didn’t fight for independence. They fought for peace, and against an evil dictator who was killing millions of people.

But now, by voting out of the EU, we’re now at the mercy of our own dictator…

It’s well known that Murdoch likes to influence politics. “It’s The Sun Wot Won It” was the headline when Tony Blair was elected. And chances are, it certainly played it’s part in the referendum. 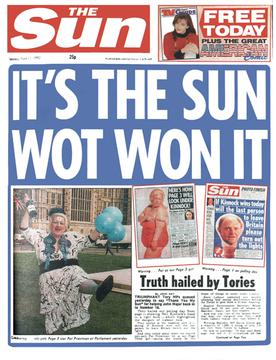 But the one thing that prevented politicians from being completely in his pockets was the EU. He couldn’t buy his way into that Government, and that’s what kept us true.

Now, there’s nothing to stop him from doing what he wants.

It is his media who insisted on keep talking to the unemployed people on housing estates, to get an ‘unbiased’ opinion. All the people who insist that foreigners are coming over here and stealing their jobs.

Because it is the people from Poland with a university degree stealing the jobs you’re not even applying for with your 1 GCSE.

These people haven’t realised that it isn’t the fault of Europe. It’s the establishment elite passing the buck. Now they’ll have to find a new scapegoat.

Of course, I suspect everything will recover, in time. But within a few hours of the announcement, we stopped being the 5th largest economy in the world. We lost our Prime Minister. The position of the Leader of the Opposition is also uncertain. The Pound severely dropped in value. The financial markets have gone into meltdown globally. Scotland and Northern Ireland are calling for independence referendums. Spain wants joint-sovereignty of Gibralter. Other countries are calling for EU exit referendums. A London bank started moving it’s employees to Ireland and Germany. Now they’re even talking about London breaking off from the UK and going it alone (I mean, what the actual F**K?). And I put my underwear on backwards.

Initially, it’s not a good start.

So what does the future hold?

This man could be our new PM. 😳 pic.twitter.com/opvWZcgo4P

Just let that sink in for a minute.

“Well, it’ll be a laugh.” Yes, because that’s exactly what I want my country ruled by, a big joke. But with Trump looming as the next PotUS, then why the hell not I suppose…

I blame myself. I voted for Boris as London Mayor in 2012. Sorry, I hold my hands up.

But in all honesty, I did carefully look at the manifestos of him and Ken Livingstone, and his was far better. He really was the best option.

The power went to his head, and now he’s insistent on spending the rest of his career trying to keep a lie going.

If you’re looking for anyone to blame, try Have I Got News For You. They’re the ones who kept booking him.

And as for UKIP, well their party is officially defunct now. I remember making a joke years ago about why members of UKIP would want to be MEPs, as a way of laughing off their argument. Now look.

So what’s next for Farage? Probably a senior position in Johnson’s Government.

And I wonder what the next argument will be for all these people coming to Britain? It will soon no longer be the fault of the EU.

People wouldn’t be coming to the UK hiding in the back of lorries, or sailing in a flimsy dingy, if it was legal? Immigration really isn’t a reason for leaving the EU, yet it seems to be why many of them have.

Who Voted To Leave?

I’m not pointing fingers, but it was them! Those people living in the homes they own, enjoying a fruitful pension, and will likely die before the UK even manages to divorce Europe.

And let’s not forget the generation who grew up just as the UK joined the union. They’ve benefited from it, and made sure the future generations can’t.

Nothing sums it up better than this quote:

Ouch. But then again… pic.twitter.com/ZVdIOv3EsT

The most depressing data from today. Young people wanted a very different future to the one voted for this morning pic.twitter.com/KdKALbZD5e

And so, it is the young people, who have to live with this decision for the rest of their lives, like myself, who largely voted to stay in.

Without the freedom of movement, many beautiful relationships will never be made. I just look back at all the students I met at university from EU countries and think that’s something the next generation will not enjoy and benefit from.

So, now it’s time I take a look at the properties I’ve saved on Rightmove, cry, and go back to dreaming at the idea of owning my own house. Because mortgages, which were already hard to get thanks to the previous generation, are only going to get harder to attain now.

By the way, does anyone know what house prices are like in Scotland?